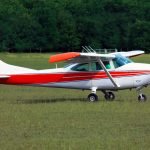 The Cessna 182 is as close to the perfect airplane as you can get. The Cessna Skylane is well built, simple, reliable and it’s one of the safest airplanes ever produced. The C182 is also one of the most versatile aircraft ever conceived. You can learn to fly in one, and then keep that aircraft and it can do almost anything you need a single engine piston aircraft, to do.

The C182 has been in production for over 50 years and is still in production today, as of November 2019. Over 23,237 Cessna 182’s have been built and the aircraft is beloved by pilots worldwide for it’s solid and forgiving flight characteristics.

The Cessna 182 Skylane is a four-seat, single-engine-piston, high-wing, tricycle gear aircraft. Turbo and retractable gear models were offered for the C182 beginning in 1977. The very first Cessna 182 was introduced in 1956 and during over 50 years of production, 23 different models were produced.

The 1977 R182 Skylane RG with retractable landing gear increased the cruise speed by about 30 mph to 197 mph or 172 knots. In 1978, the Turbo and Retractable TR182 Skylane was able to increase cruise speed by 10-15%. Overall a decent cruise speed with all models of the C182, combined with a 1,050 mile range makes this a great all around choice for the majority of pilots.

The Cessna 182 can fulfill about 90% of normal single engine utility requirements, making it one of the best all-around great airplanes for most people. The C182 can hold up to 3 passengers, can be equipped with floats and came in Retractable gear and turbo options. The Cessna Skylane can be used for flight training and by flight schools but is also a great daily driver for most pilots.

The Cessna 182’s has a useful weight of 540 pounds when full loaded with fuel. The Cessna Skylane had a takeoff distance of 1,515 ft and landing distance of 1,350 ft which enable it to get in and out of shorter runways.

I can’t think of a good reason as to why you shouldn’t choose a Cessna 182. For most pilots, unless you are flying in and out of the back country or have a need for a higher performance, faster aircraft or specific utility need, the Cessna 182 is almost the perfect aircraft for everyone.

The C182 is perfect for learning to fly, is a stable for flight schools worldwide, it’s a great all-around aircraft for most private pilots and the versatility in utility of the aircraft is almost second to none.