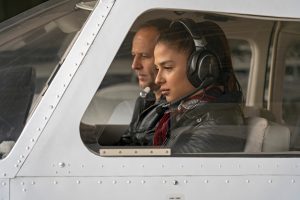 If you’re attending flight school or have your pilot’s license and fly someone else’s aircraft, you accept quite a bit of risk when you do so. If something you do leads to injuries, damage to the craft, or damage to property on the ground, you may be on the hook financially for the costs associated with those events.

You may think your flight school or fixed-base operator (FBO) already has insurance that provides coverage for these types of incidents, but that’s typically not the case. Insurance is typically your responsibility.

That’s why it’s important to consider non-owned aircraft insurance if you attend flight school, fly someone else’s aircraft, or if your company rents an aircraft for corporate use.

What Is Non-Owned Aircraft Insurance?

Non-owned aircraft insurance, also known as aircraft renters insurance, is a unique type of insurance that pays a portion or all of the cost of covered events when you operate someone else’s aircraft.

These are typically one-year policies with premiums paid for the entire year at once. However, you can usually decide to make monthly premium payments instead.

What Does Aircraft Renters Insurance Cover?

There are a few points of coverage to consider when you purchase an aircraft renters insurance policy. Those include:

What Type of Aircraft Does Aircraft Renters Insurance Cover?

You can open a non-owned aircraft insurance policy for just about any type of aircraft. These include, but are not limited to:

How Much Does Aircraft Renters Insurance Cost?

As mentioned above, non-owned aircraft insurance is designed as a secondary insurance policy and is typically significantly less expensive than traditional aircraft insurance. You can find policies that start at $72 per year with minimal coverage caps. These plans typically come with $250,000 in liability coverage that’s limited to $25,000 per passenger.

Physical damage and hull coverage are typically add-ons and come at an additional cost. For example $5,000 in physical damage coverage is usually around $86 per year, while a policy with $200,000 coverage limits on hull and property damage costs around $1,663 per year.

What Factors Do Underwriters Consider for Non-Owned Aircraft Insurance Coverage?

There are several factors underwriters consider when pricing your non-owned aircraft insurance policy. Some of the most important factors include:

Find the answers to the most common questions about aircraft renters insurance below.

Can I Cancel My Policy Before the Term Ends?

Yes, but you may have to pay minimum earned premiums. In most cases, you’ll need to pay at least six months of premiums plus a 10% cancellation fee based on the remaining premium payments in the term.

Should a Company that Charters Aircraft Purchase a Non-Owned Aircraft Insurance Policy?

Non-owned aircraft insurance is typically only for individuals. However, there are special types of insurance policies that cover corporations that rent aircraft for corporate use.

How Can I Reduce the Cost of Aircraft Renters Insurance?

There are a few things you can do to make sure your aircraft renters insurance premiums are minimal: