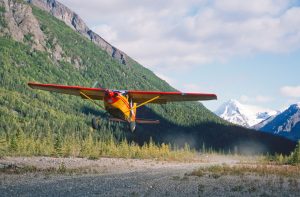 The Cessna 185 is basically a Cessna 180 with a stronger fuselage, larger vertical fin and a 300 hp Contintinental IO-520 engine vs the 230 hp engine on the Cessna 180. The Cessna 180 and 185 are considered the ultimate bush planes and are designed to fill a variety of personal aircraft roles. The 185 excels at utility uses including off-airport landing and bush flying. The Cessna 185 can also be equipped with floats, amphibs or skis.

Cessna 185 insurance, like all airplane insurance, is broken down into 2 specific coverages. The first is Liability Coverage, which is standard on every aircraft insurance policy and the second is optional hull coverage, which covers damage to the aircraft itself.

A real-world example of how this aviation liability coverage would protect you: If while flying your Cessna 185 and damaged property or caused bodily injury outside of the aircraft, you would have the full $1,000,000 in coverage to pay for damages that occurred. If the airplane crashed and you had passengers inside the aircraft that were injured, your insurance policy would pay up to $100,000 for each passenger. The Cessna 185 typically holds 5 passengers, so you up to $500,000 of your total $1,000,000 insurance policy could be used to pay for passenger liabilities, leaving you with $500,000 for other damage outside of the aircraft or legal defense.

Other liability options: Some companies may offer lower liability at $500,000 but the cost savings typically doesn’t make this a viable choice. Higher liability coverage on the Cessna 185 is typically only available to more qualified pilots with at least Private + IFR ratings and at least 200 hours in make and model. The next step up from $1,000,000 total liability, limited to $100,000 per passenger is $1,000,000 total liability limited to $250,000 per passenger, often called 1 mil sub 250.

The second coverage on a Cessna 185 aircraft insurance policy is hull coverage and is an optional coverage. Aircraft hull insurance covers damage to the aircraft itself and is an agreed value, not subject to depreciation. Agreed value is decided during the initial insurance quoting process, the aircraft owner requests an insurance quote for his or her Kitfox and requests a quote including hull coverage in the amount of say $1120,000. Once an aviation insurance company provides a quote, they are agreeing with you that your aircraft is worth $120,000.
*Insurance companies may place additional stipulations on quotes to prove the value of your aircraft prior to binding, if your agreed value is higher than bluebook.

Most aviation insurance companies do not offer deductibles higher than $0 deductibles, which means in the event of a total loss, if your aircraft was insured for $120,000, you would get a straight check for $120,000.

As of February 2020, there are 9 carriers quoting Cessna 185 insurance in the U.S. We consider qualified pilots to have at least a private license, with 750 total hours, 250 tailwheel and 25 hours in the make/model.

Since 1977, BWI has specialized in tailwheel insurance and created the National Cessna 180/185 Insurance Program to offer lower rates and better coverages for qualified pilots who meet our minimum requirements. More information about our program can be found here: https://bwifly.com/aviation-insurance/national-cessna-180-185-program/

For more information or to get an actual Cessna 185 insurance quote, please fill out a quote request online here or call us at 800.666.4359