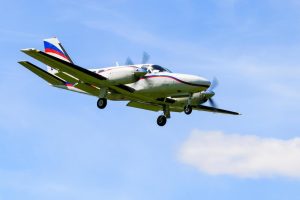 In the late 1970s, Cessna was scrambling to fill the “turboprop gap” in their product lines. Though offering a large number of cabin class piston twins and with the corporate jet Citation line selling very well, Cessna had no competition to offer to Beechcraft’s King Air nor Piper’s Cheyenne.

In the rush to get models to production both of the new designs were based on successful piston twins. The larger of these two models would borrow heavily from the Cessna 404 Titan – the largest of the Cessna twins. Coming from the Titan was the basic fuselage size and exterior look, but major structural changes including the replacement of the Titan’s unique sharply squared windows and a strengthening of the cabin door frame allowed for the addition of a 6.3 psi (pounds per square inch) pressurization system, beating both Beechcraft and Piper’s competing designs. The Titan’s massive and heavy Continental piston engines were replaced by 635 horsepower Garrett TPE331 turboprops. Unlike the Pratt & Whitney engines used in competitors, the Garrett engines were a direct drive turboprop offering greater fuel efficiency and faster response. A wing design also based on the Titan was expanded slightly to accommodate the new engines and bumped fuel capacity to an incredible 475 gallons, far exceeding any turboprop in production at the time.

The efficient engines and great fuel capacity gave the new Model 441 a prodigious amount of range and made coast to coast flights eastbound a reality, surpassing even what Cessna’s early business jet line could do. To make this flight doable for passengers, the 441 included a small aft lavatory and refreshment center as well as comfortable seating for up to ten passengers.

The 441 would initially be named “Conquest” but in a confusing reorganization in 1983 Cessna would rename the turboprop Model 425 (formerly known as the Corsair) to Conquest and redesignate the 441 as the Conquest II. The renaming signaled Cessna’s vision of the start of a line of turboprop Conquest products to parallel their growing Citation jet dynasty.

Unfortunately, the crashing market conditions of the early and mid-1980s across all of general aviation would also mean the end of the Conquest line and by 1986 both models were out of production. The Model 441 would tally a total of 362 sales. 35 years later, demand for the unique capability offered by the 441 remains strong. Most 441s have been upgraded with more powerful versions of the Garrett engines offering cruise speeds in excess of 300 knots at 35,000 feet, keeping the Conquest II viable well into the 21st century.

Cessna 441 Conquest II insurance, like all aviation insurance, is broken down into 2 specific coverages. The first is Liability Coverage, which is standard on every aircraft insurance policy and the second is optional hull coverage, which covers damage to the aircraft itself.

Cessna 441 Conquest II aviation liability insurance covers damage caused by the aircraft, outside of the aircraft, specifically property damage, bodily injury, and provides for legal defense in the event that the aircraft owner or policyholder is sued.

Other liability options: Higher liability coverage on the Cessna 441 Conquest II is available to qualified pilots with experience in the make and model and a minimum Commercial/MEL/IFR license/ratings.

The second coverage on a Cessna 441 Conquest II insurance policy is hull coverage and is an optional coverage. Aircraft hull insurance covers damage to the aircraft itself and is an agreed value, not subject to depreciation. Agreed value is decided during the initial insurance quoting process, the aircraft owner requests an insurance quote for his or her Cessna 441 Conquest II and requests a quote including hull coverage in the amount of say $1,250,000. Once an aviation insurance company provides a quote, they are agreeing with you that your aircraft is worth $1,250,000.
*Insurance companies may place additional stipulations on quotes to prove the value of your aircraft prior to binding, if your agreed value is higher than bluebook.

As of January 2021, there are 8 carriers quoting Cessna 441 Conquest II insurance in the U.S. We consider qualified pilots to have at least a Commercial License and IFR/MEL ratings, with 3,000 total hours, 1,000 MEL hours and 50 hours in the make/model.

For more information or to get an actual Cessna 441 Conquest II insurance quote, please fill out a quote request online here or call us at 800.666.4359