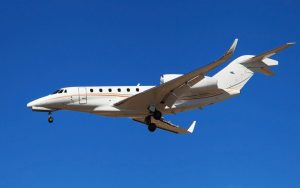 Part of the broader Cessna Citation family, the Cessna Citation X is an American made business jet manufactured by Cessna. It’s maiden flight took place in December of 1993 and by the middle of 1996, it had received its certification and was delivered for operation. In 2012, the improved Citation X+ was offered with upgraded systems and a larger cabin. By 2018, production of the Citation X wound down after a total of 338 deliveries.

The Citation X found popular success as a corporate jet ferrying executives from companies like General Motors, Honeywell, and the Target Corporation. Moreover, high net worth individuals owned the plane for private use of which Oracle’s Larry Ellison, golfer Arnold Palmer, and former President Donald Trump could be counted among them.

The Cessna 750 Citation X has demonstrated a positive safety record with only 3 hull-loss incidents records. Those incidents include:

Cessna 750 Citation X insurance, like all aviation insurance, is broken down into 2 specific coverages. The first is Liability Coverage, which is standard on every aircraft insurance policy and the second is optional hull coverage, which covers damage to the aircraft itself.

Cessna 750 Citation X aviation liability insurance covers damage caused by the aircraft, outside of the aircraft, specifically property damage, bodily injury, and provides for legal defense in the event that the aircraft owner or policyholder is sued.

Other liability options: Higher liability coverage on the Cessna 750 Citation X is available to qualified pilots with experience in the make and model and a minimum Commercial/MEL/IFR license/ratings.

The second coverage on a Cessna 750 Citation X insurance policy is hull coverage and is an optional coverage. Aircraft hull insurance covers damage to the aircraft itself and is an agreed value, not subject to depreciation. Agreed value is decided during the initial insurance quoting process, the aircraft owner requests an insurance quote for his or her Cessna 750 Citation X and requests a quote including hull coverage in the amount of say $2,000,000. Once an aviation insurance company provides a quote, they are agreeing with you that your aircraft is worth $2,000,000.
*Insurance companies may place additional stipulations on quotes to prove the value of your aircraft prior to binding, if your agreed value is higher than bluebook.

Most aviation insurance companies do not offer deductibles higher than $0 deductibles, which means in the event of a total loss, if your aircraft was insured for $2,000,000, you would get a straight check for $2,000,000.

As of January 2021, there are 8 carriers quoting Cessna 750 Citation X insurance in the U.S. We consider qualified pilots to have at least a Commercial License and IFR/MEL ratings, with 3,000 total hours, 1,000 MEL hours and 50 hours in the make/model.

For more information or to get an actual Cessna 750 Citation X insurance quote, please fill out a quote request online here or call us at 800.666.4359