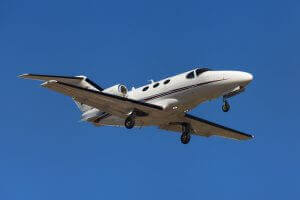 The early 2000s were an interesting time for business and private aviation. Advances in avionics and engine technology were producing extremely capable and efficient aircraft and there was a market for smaller jets catering to the “owner-operator” pilot who wanted a turbine to fly themselves and just a few passengers.

Though many manufacturers responded with designs for the new very light jet (VLJ) market, few could claim the storied past of the Cessna Aircraft Company. Cessna was able to use its experience of producing thousands of business jets to introduce a new model to fill the light weight segment below the CitationJet line.

Launched in 2002, the new CE-510 Mustang used an all-new fuselage design seating four passengers in a club configuration in addition to two seats in the cockpit. Unlike several competing aircraft, the Mustang would include a small toilet across from the main entrance door as well as a small amount of cabinetry usable as storage for snacks and drinks. While most other VLJs would have cramped seating more akin to a single-engine piston aircraft and no passenger amenities, the interior design of the Mustang was similar to a scaled-down version of their larger jet aircraft for more comfort. Baggage space in both the nose and tail cone allowed for over 600 pounds (280 kg) of luggage to be carried and both compartments could fit skis as well as golf bags, a capacity unmatched by any competitor. Modern Garmin G1000 avionics were fitted for reduced pilot workload, allowing the type to be flown by a single pilot, and systems were heavily based on the known and proven versions used in the CitationJet line.

First flight took place in April 2005 and deliveries commenced in late 2006. In 2010 the High Sierra edition would bring an updated interior to the Mustang but otherwise the basic aircraft would remain virtually unchanged throughout production, a testament to the excellent early design. A new Mustang would leave the factory on average every four to five days for the first few years of manufacture, while simultaneously several competing aircraft closed shop.

By the early 2010’s, the private aviation market had generally slowed in line with the worldwide economic downturn and yearly production had slowed to around 40 aircraft. Ironically the demise of the Mustang would come from Cessna itself with the introduction of the Citation M2 in 2013, a modernization of the Citation CJ1 with new avionics and updated engines. Though slightly heavier than the Mustang, the M2 boasted a faster cruising speed and more range while sharing parts and training commonality with the very successful CJ series. The two models would be produced concurrently until 2017 when Mustang production was wound down, with a total of almost 500 leaving the factory in 10 years.

Cessna CE-510 Mustang insurance, like all aviation insurance, is broken down into 2 specific coverages. The first is Liability Coverage, which is standard on every aircraft insurance policy and the second is optional hull coverage, which covers damage to the aircraft itself.

Cessna CE-510 Mustang aviation liability insurance covers damage caused by the aircraft, outside of the aircraft, specifically property damage, bodily injury, and provides for legal defense in the event that the aircraft owner or policyholder is sued.

Other liability options: Higher liability coverage on the Cessna CE-510 Mustang is available to qualified pilots with experience in the make and model and a minimum Commercial/MEL/IFR license/ratings.

The second coverage on a Cessna CE-510 Mustang insurance policy is hull coverage and is an optional coverage. Aircraft hull insurance covers damage to the aircraft itself and is an agreed value, not subject to depreciation. Agreed value is decided during the initial insurance quoting process, the aircraft owner requests an insurance quote for his or her Cessna CE-510 Mustang and requests a quote including hull coverage in the amount of say $1,000,000. Once an aviation insurance company provides a quote, they are agreeing with you that your aircraft is worth $1,000,000.
*Insurance companies may place additional stipulations on quotes to prove the value of your aircraft prior to binding, if your agreed value is higher than bluebook.

Most aviation insurance companies do not offer deductibles higher than $0 deductibles, which means in the event of a total loss, if your aircraft was insured for $1,000,000, you would get a straight check for $1,000,000.

As of January 2021, there are 8 carriers quoting Cessna CE-510 Mustang insurance in the U.S. We consider qualified pilots to have at least a Commercial License and IFR/MEL ratings, with 3,000 total hours, 1,000 MEL hours and 50 hours in the make/model.

For more information or to get an actual Cessna CE-510 Mustang insurance quote, please fill out a quote request online here or call us at 800.666.4359