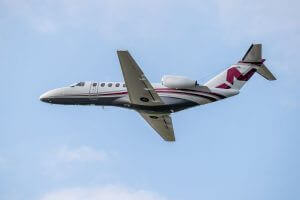 The Cessna CitationJet is a production line of light business jets and part of the broader Citation series out of Cessna. Launched in 1989, it was awarded FAA certification in 1992 and has been a regular staple in the skies above the world ever since. The basic CitationJet has seen various upgrades and updates over the years to include the CJ1/M2 variants as well as the CJ2/Cj2+, Cj3/Cj3+ and finally the CJ4. As of 2017, over 2,000 of the various variants have been delivered around the world.

The Model 525 which was marketed as the Cessna Citation M2, powered by FJ44-1AP-21 turbofans. The Citation M2 is one of the more common jets of the series due to its performance and upgrades. The model became the entry-level jet for Cessna after it ceased production of the Citation Mustang in 2017. As of June 2020, over 250 M2s were delivered for use.

There have been a total of 29 hull-loss incidents for the CitationJet that produced a combined total of 43 fatalities. Among those, the worst fatal incidents include:

Cessna Citationjet insurance, like all aviation insurance, is broken down into 2 specific coverages. The first is Liability Coverage, which is standard on every aircraft insurance policy and the second is optional hull coverage, which covers damage to the aircraft itself.

Cessna Citationjet aviation liability insurance covers damage caused by the aircraft, outside of the aircraft, specifically property damage, bodily injury, and provides for legal defense in the event that the aircraft owner or policyholder is sued.

Other liability options: Higher liability coverage on the Cessna Citationjet is available to qualified pilots with experience in the make and model and a minimum Commercial/MEL/IFR license/ratings.

The second coverage on a Cessna Citationjet insurance policy is hull coverage and is an optional coverage. Aircraft hull insurance covers damage to the aircraft itself and is an agreed value, not subject to depreciation. Agreed value is decided during the initial insurance quoting process, the aircraft owner requests an insurance quote for his or her Cessna Citationjet and requests a quote including hull coverage in the amount of say $1,250,000. Once an aviation insurance company provides a quote, they are agreeing with you that your aircraft is worth $1,250,000.
*Insurance companies may place additional stipulations on quotes to prove the value of your aircraft prior to binding, if your agreed value is higher than bluebook.

As of January 2021, there are 8 carriers quoting Cessna Citationjet insurance in the U.S. We consider qualified pilots to have at least a Commercial License and IFR/MEL ratings, with 3,000 total hours, 1,000 MEL hours and 50 hours in the make/model.

For more information or to get an actual Cessna Citationjet insurance quote, please fill out a quote request online here or call us at 800.666.4359