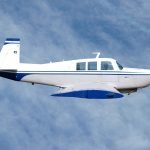 Mooney Aircraft was founded by Albert and Arthur Mooney in 1929. In 2019 after many years in production, Mooney announced that they were going out of business.

The very first Mooney was the Mooney Mite M-18. This aircraft was introduced in 1947 and designed to appeal to all the fighter pilots that came home from WW2. 283 Mooney M-18 Mite’s were produced.

In 1955 Mooney introduced it’s new aircraft called the Mooney M20. The M20 is a single-engine, four-seat, low-wing retractable, tricycle gear aircraft. Over 11,000 Mooney M20 aircraft have been produced over the years and it is one of the most successful civilian aircraft models in history.

The M20 is known for it’s combination of speed and efficiency, and was able to fly 170 mph, with a small 150 horsepower Lycoming O-320 engine.

There have been 23 different variants of the Mooney M20 since production began in 1955. The Mooney airframe design was so clean and efficient, that it didn’t change throughout most of the different Mooney models. The first 9 models of the M20 had the Lycoming O-320 or O-360 engine. In 1978 Mooney switched to the Continental TSIO-360-GB, which was a turbocharged six-cylinder engine. Mooney stuck with this new engine until the 1988 Mooney M20L, which switched to a piston Porsche PFM 3200. Mooney equipped aircraft with a Continental IO-550G engine both turbo and piston for the final years of production.

The 1955 Mooney M20 could hit speeds of 170 miles per hour. The engine burned 8-10 gallons per hour and had a great range of 1,100 nm. Later M20 models had cruise speeds of 278 MPH and with extended fuel tanks, could fly 2,400 nautical miles!
Speed and range is where Mooney M20’s really stood out against other similar conventional aircraft. The Airframe and efficient engine enabled Mooney’s to fly farther and faster than the competition.

The principle utility for the Mooney M20 is for up to 4 people to go from point A to point B as quickly and efficiently as possible. There are very few cargo and commercial utility uses for Mooney Aircraft as their payload is very small and retractable, tricycle-gear aircraft are not well suited to land off-airport. Other single-engine aircraft can go faster and farther than Mooney’s but the price difference is truly incredible. Used Mooney’s in good condition can be purchased for a fraction of the price of a new Cirrus for example.

Why choose a Mooney?

The Mooney M20 is a fast, advanced aircraft, newer or less qualified pilots should steer clear of this aircraft until their experience builds. Typically, you would want to build 500 total hours, at least 50 of them being in retractable gear aircraft. You would also want to get your IFR rating before transitioning into a Mooney.
Students can learn to fly in Mooney’s and some Aviation Insurance Companies will provide quotes however the better route is to build time and then transition.

If you are a qualified pilot., there are some specific reasons for choosing a Mooney. If you want to fly somewhere fast and efficiently, either for business or pleasure use. You really can’t go wrong with a Mooney. If you need the extra utility of landing off airport or have specific cargo needs, the M20 probably isn’t the right aircraft for you.