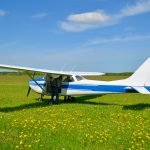 The Cessna 150 is the fifth most produced civilian aircraft in the world. Since 1958, over 23,949 Cessna 150’s have been produced. The Cessna 150 was designed as a successor to the Cessna 140, which ceased production in 1951. Four models of the Cessna 150 were available: Commuter, Standard, Trainer and Patroller. All Four models had slight cockpit, performance and aesthetic tweaks. Cessna advertised the 150 as the “world’s premier trainer,” targeted at student pilots and flight schools. The Cessna 150 “Patroller” model, was designed for utility work and tasks such as aerial scouting and pipeline patrol. Overall the Cessna 150 is a great, well built aircraft but it is definitely considered a small aircraft. The 150 is a bit tight on the inside, especially for larger pilots, however because of it’s light weight, it can also take-off rather quickly.

The Cessna 150 is a two-seat, single engine piston aircraft with a high wing and tricycle landing gear. The 150 was first introduced in 1958 and a total of 16 different models were produced until 1977 when production ceased. The 150 is powered by a Continental Model 0-200-A 100 hp four cylinder engine. Other typical Cessna 150 characteristics are it’s large flaps that extend to 40 degrees, no back window, straight tail and excellent handling qualities. The most successful model year came with the 1966 Cessna 150, which included a swept back tail fin, larger baggage area and electrically operated flaps.

All models of the Cessna 150 came with the 100 hp continental engine which gave the Cessna 150 a top speed of 136-141 knots and a typical cruising speed of around 104 knots. The 150 came with dual 13 gallon fuel tanks as standard and could be upgraded to Long Rang Tanks which had added 6 gallons per side for a total of 38 gallons. With a typical fuel burn rate of about 5.6 gallons per hour, the 150 had a range of about 480 miles with standard tanks. While neither the speed or range make the Cessna 150 stand out from it’s competitors, all around it is a very reliable and simply built small aircraft.

The Cessna 150 was primarily designed as a trainer aircraft and due to the aircrafts simplicity and great handling performance, it definitely excels and performs best as a training aircraft. Other utility uses such as aerial patrol, short hop flights and the aircrafts off airport landing ability, give the 150 a few more options and some solid utility reasons to own one.

If you are a student pilot, new to flying, a flight school owner or you just want a basic, simple to fly, reliable, easy to maintain, inexpensive to operate aircraft, the Cessna 150 is absolutely a very good choice.