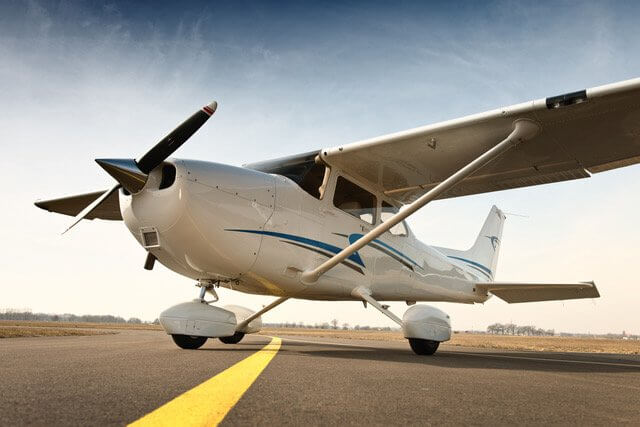 Cessna 172 operating costs are fairly straightforward and significantly less than most other conventional aircraft. Cessna Skyhawk operating costs are typically broken down by hour and include, fuel, insurance, tie-down or hangar storage fees, regular maintenance inspections, and landing fees. Typical Cessna 172 Operating costs average between $100-$200 per hour depending on a wide range of variables.

The Cessna 172 burns about 7-9 gallons per hour with Avgas typically costing about $6 per gallon, hourly fuel costs for the Cessna Skylane run between $42 and $54 per hour.

Depending on whether you just carry Liability coverage or Full Flight Hull Coverage, this cost will vary, but it typcally runs between $250-$1,400 per year, which adds about $2-$5 per hour depending on the amount of total hours flown in a year.

Depending on whether the aircraft is hangared or tied down at an airport, these fees will typically run between $100-$300 per month.

The Cessna 172 operating costs should include money set aside depending on the amount of hours flow for regular maintenance and inspections. Depending on the age and condition of the aircraft, these costs typically range between $15-$30 per hour.

Most small airports don’t have landing fees, but most of the larger and controlled tower airports do, Landing fees are typically a very small amount of the hourly operating costs of a Cessna Skyhawk and depending on the airport and amount of landings, can range anywhere from $80-$200 per year.