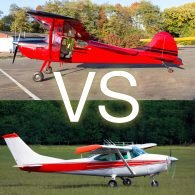 Taildraggers were all you could get in the early years of flying.  Then came an idea on how to reduce ground loops, increase visibility on the runway, and provide more stability in cross wind landings. Thus, the tricycle gear aircraft was born. Cessna, the largest aircraft manufacturer, produced several models of tailwheel aircraft, has produced the […]