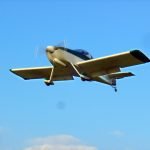 Vans Aircraft are low-wing, one, two or four seat experimental kit aircraft. Vans Aircraft are designed to have easy handling, aerobatic ability, fast cruise speeds and short runway landing requirements. Vans Aircraft include both tailwheel and tricycle gear models and have an average cruise speed of around 200 mph. Recently with the introduction of the FAA’s light sport aircraft category, some Vans Aircraft models fall into this category and can be flown with a simple drivers license.

In 1965 Richard VansGrunsven built the very first Vans RV1, which was a modified Stits SA-3 Playboy. VansGrunsven modified the aircrafts engine, tail, fuselage and wing.
In 1972 the RV-3 was introduced and all models after were based on this initial design.
Throughout Vans 46 year history, there have been 14 different RV models, each with slight changes and differences. Over 10,500 Vans RV Aircraft have been built and the Vans RV line is considered one of the most successful experimental/kit aircraft ever built.

All Vans RV Aircraft either have one, two or four seats, have low wings and are powered by the following engines: Lycoming O-235, Lycoming O-320, Lycoming O-360, Lycoming IO-360, Continental IO-360ES or the Lycoming IO-540 engine. The original Vans rv3 was a tailwheel aircraft and the first tricycle gear aircraft was introduced in 1985 as the RV-6A.

The list below shows basic information about each model produced

Despite slight variations between the different Vans Aircraft models throughout the years, Most Vans Aircraft typically cruises at 200 mph, with ranges between 600 and 900 miles.

Why choose a Vans Aircraft?

If you are looking for a small but fast and highly maneuverable aircraft, the Vans RV might be just the aircraft for you!
Vans Aircraft are some of the best selling experimental / kit-aircraft every built. They have a great safety track record, and come in a variety of models and options. Vans Aircraft fly fast at around 200 mph, are fairly fuel efficient and with over 10,000 having been built, they are readily available at aircraft sales shops across the country.